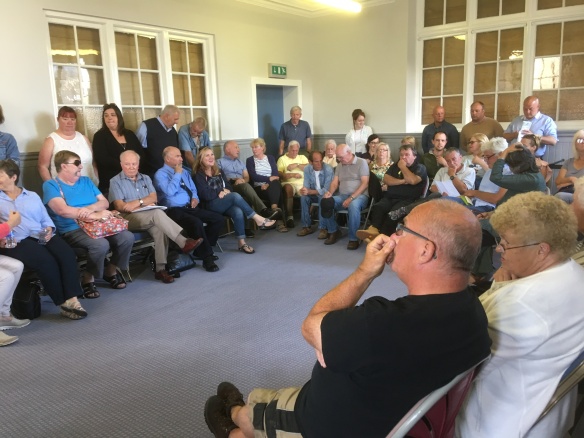 2 out of 3 Fife Councillors, most Community Councillors, several people from the Shows and residents from all parts of the town discussed ‘the problem’ for over an hour.

The meeting was chaired by CC Chairman Alex MacDonald who did his best to make sure only one person talked at a time.

Towards the end he took a vote on several specific questions.

Those present almost unanimously wanted no parking on The Links at any time. A significant majority wanted an end to the present situation where Fife Council has sanctioned parking on the grass at the place used for the Highland Games – there will be no parking on the day of the games.

Fife Council is also restricting on-road parking on that day, though the notice makes no mention of where parking will be permitted –

There was general agreement that parking was a problem.

Increasing numbers of people are coming by car rather than public transport – especially at the moment with the unusual run of hot weather.

Various suggestions were made about sites where parking was possible, notably Forth Ports owned land including BiFab’s carpark.

Shuttle buses (common in other places hosting significant events) were suggested several times as was the idea that Fife Council had ‘no money’ even for signs to direct people to temporary carparks.

Fife Council was blamed for not adequately dealing with parking over many years.

It was agreed that visitors were essential for Burntisland and car use was inevitable and that most people were ‘unwilling to walk far’.

Encouraging Active Travel, and the fact that this was one of Fife Council’s policies was mentioned and also that Burntisland Station is not fully accessible.

The Showmen made it clear that they weren’t in favour of parking on The Links but were reluctantly managing the parking for Fife Council, to prevent a worse situation.

Various people questioned the legality of Fife Council’s actions in drawing up plans for parking, partly because it’s Burntisland Common Good land, but also whether correct procedures, including risks assessments, have been followed.

The meeting was valuable for airing views, suggesting options and getting a feeling for local opinion, but ended with unanswered questions and no certainties about short or long term ‘solutions’ to parking on The Links or elsewhere. Over to Fife Council…