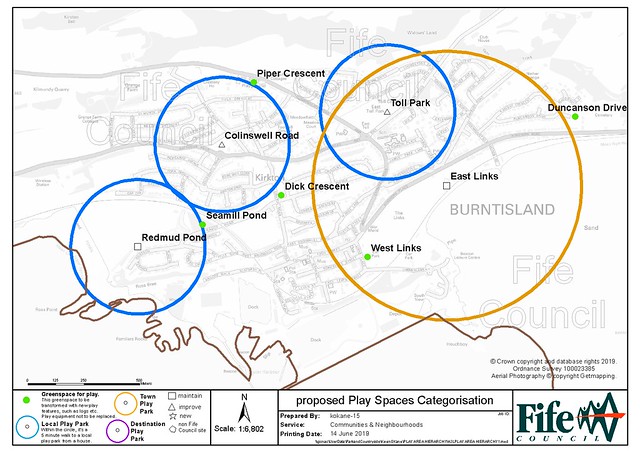 Fife Council is undertaking a major review of its playparks. Last year it produced its Draft Play Park Strategy 2019 – 2029. It is intended that it will be consulted on this autumn.

The Courier reported “council officials have pinpointed a total of 172 sites throughout the region which are unlikely to be replaced when equipment reaches the end of its life“.

In spite of the press report (link above) it has only recently been realised what the proposals would mean for Burntisland – now clearer due to the release of the map (top).

The biggest surprise for many locals is that the plan proposes that the fairly new Spider Park would not have its equipment replaced in future.

A morre pressing concern is for the small local play parks at Piper Crescent, Duncanson Drive and Dick Crescent. Local people near the first two have formed groups to consider various options and have had meetings with Community Councillors.

The Community Council has set up a dedicated web page and agreed to put £75 towards paint.