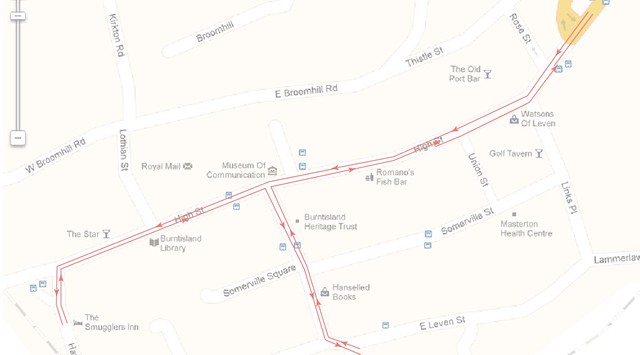 “The parade to the Parish Church will leave from Burntisland Fire Station at 10.30, led by Burntisland Pipe Band.

“The Parade will consist of representatives from The Navy, Fife Council, Burntisland Community Council, Ex-Servicemen and women, members of the ATC, Scouts, Guides, Cubs and Brownies and members of the public.

”Those wishing to take part in the Parade are requested to muster at the Fire Station at 10.15am and will parade at 10.30am to the Parish Church.”

The traditional parade and services to commemorate those who gave their lives in defence of our country takes place on the Sunday nearest to the 11th of November.

The parade consists of representatives from the Armed Forces, Fife Council, The Community Council, Ex-service personnel, members of youth organisations and members of the public.

It assembles at Harbour Place. Led by the Burntisland and District Pipe Band the parade marches via the High Street for the formal service commencing at 10.45 am. (This alternates between the Parish Churh and Erskine.

Following the service, the parade will reform and march to the War Memorial to join members of the public for a short commemorative service and the laying of wreaths.

On reforming, the parade marches back along the High Street to the Burgh Chambers where on dismissal, participants will attend an informal reception hosted by Burntisland Community Council.