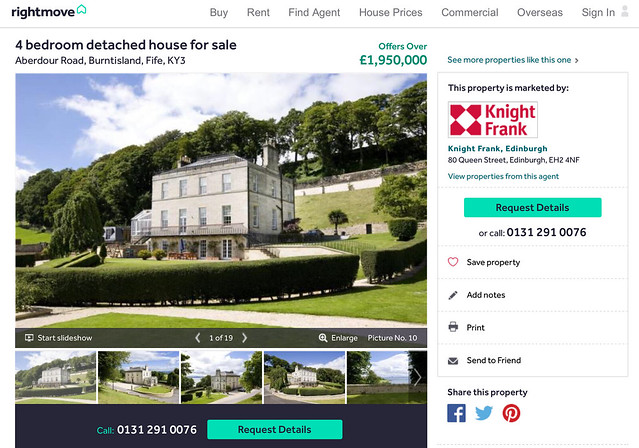 “Collinswell was built in 1826 by the Young family who were local distillers and landowners. It is built in classical Georgian architectural style using locally quarried Culloae stone.

The house was bought in 1913 by British Aluminium for the local managing director and was later used as a staff clubhouse between 1957 and 1977. For the next 20 years the house lay unused and boarded up until in 1997 it was bought by the current owners who restored it from the ground up.”

Owned by Zander Williamson whose company developed the Collinswell Park estate on the former Alcan site.

John Gifford who wrote the Fife volume of The Buildings of Scotland, published in 1988, was a bit underwhelmed (though the building was presumably empty at the time).

“Colinswell (his spelling) House. Charmless early C19 box. Was the cresting on the roof a last-minute attempt to give it interest?”

Probably the most expensive house in Burntisland.