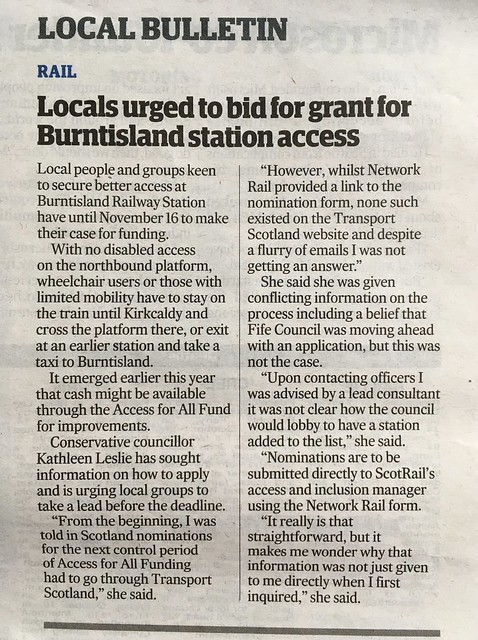 The Courier has reported some of the details of the confusion around the process of nominating a station for Department of Transport funding.

In principle the process is simple.

“The Access for All Programme provides an obstacle free, accessible route to and between platforms.”

“As part of the Governments Inclusive Transport Strategy announced 25th July 2018, further funding up to £300m has been secured to continue with the Access for All Programme in Control Period 6.”

So far so good, but the form is in fact a 25 column spreadsheet and campaigners have been told they have to fill fewer than half of them.

They have also been told that the form has to be sent to ScotRail. ScotRail then talks to Network Rail Scotland. A list of preferred stations is drawn up with the involvement of Transport Scotland and sent to the Cabinet Secretary for Transport, Infrastructure and Connectivity (Michael Matheson) in Edinburgh.

He will then approve (or modify) the list and send it to the DfT in London.

The next meeting of the Burntisland Station campaign group is on Tuesday.