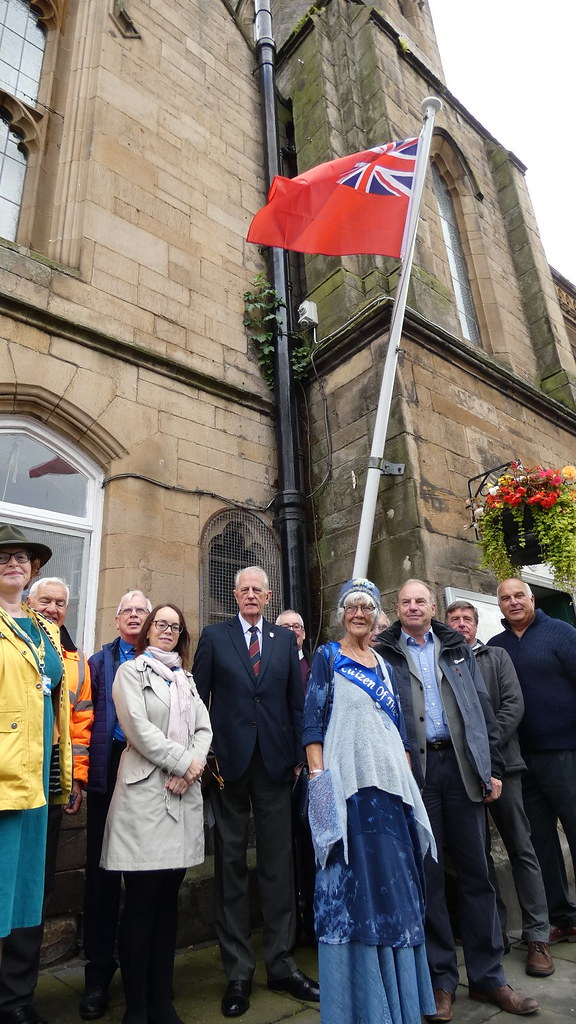 Today Burntisland marked 80 years since the start of the Second World War, with a flag raising ceremony on Merchant Navy Day.

“Since the start of this century the 3rd of September has been the UK’s designated Merchant Navy Day, the UK’s prosperity has of course been dependent on the merchant navy since the beginning of international trade.

“But only during the Two World Wars did the British public realise that without merchant navy ships and brave seafarers, the UK would soon be starved of food and other essential supplies.

“While many people know that the 3rd of September 1939 marked the outbreak of the Second World War, few are aware that it also marks the first major British maritime casualty, the merchant vessel SS Athenia, torpedoed just a few hours after hostilities were declared, with the loss of 128 passengers and crew.

“Although many hundreds of merchant ships and thousands of seafarers would meet the same fate in the years to come, the 3rd of September is now enshrined as Merchant Navy Day to honour the brave men and women who kept our island nation afloat during both World Wars, and even during peacetime – and continue to face – the more routine perils of violent storms and mountainous seas.

“By us raising the Red Ensign we remember them and the debt we all owe to merchant seafarers past and present.”

“On this Merchant Navy Day, I very much hope you will support this campaign by Seafarers UK to remember the sacrifice, salute the courage and support the future of the often unsung personnel of our Merchant Navy. Too often they are the forgotten or invisible service, by raising the Red Ensign you will ensure that at least on this day they are remembered. Your act will mean so much to their families and to the retired, but most especially to those at sea.”

The flag will fly until Friday.

Today is #MerchantNavyDay and a #RedEnsign will be flying at over 950 locations ashore as a ‘thank you’ to #MerchantNavy #seafarers. Find out more: https://t.co/keBxRJtYBe pic.twitter.com/1Co83dhhUO