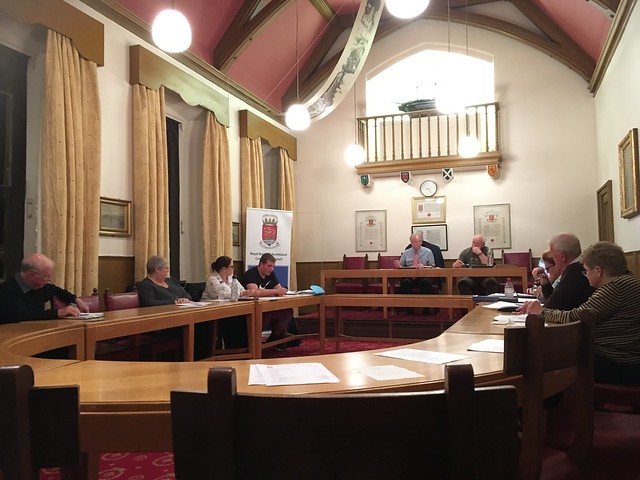 Last night’s meeting faced a packed agenda and a warning from the Chairman Alex MacDonald that it would finish at 9:30 even if all items weren’t reached.

In spite of several presentations informing the CC of issues and activities in the town and various contributions from members of the public, all topics were dealt with before the cutoff time.

The resignation of George McLauchlan as Secretary and Treasurer had created two post vacancies and also made people realise how many other areas of CC activities he was involved in or largely responsible for. 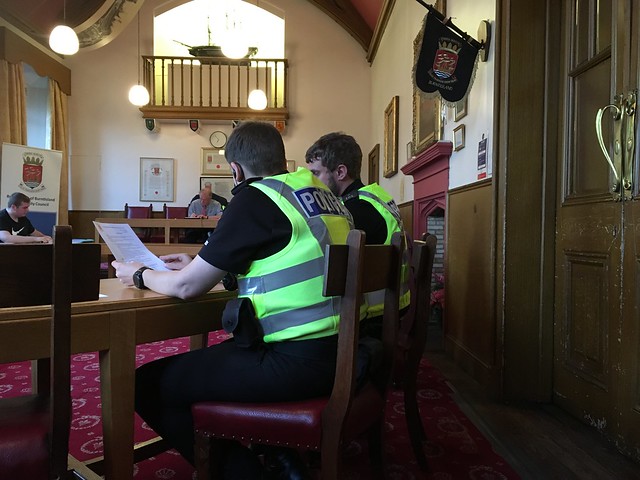 After recent retirals and redeployments, Burntisland has lost familiar Police faces. The new Community Officer for the Burntisland area is Danny Hatch. He told the meeting that he was new to the community policing role but had “sought it out” and although he had worked for 10 years in Kirkcaldy, he has “some local knowledge” of Burntisland (including awareness of antisocial behaviour issues).

He confirmed that at the moment he was on his own (a concern raised at previous CC meetings), but that “hopefully I will have a colleague by October” – and also a probationer.

He also suggested he would continue to be based in Burntisland. It is likely that the current Police Station will be completely closed and so the Police will need to find an alternative base.

Danny indicated that he hoped to attend CC meetings quite regularly – something his predecessors didn’t manage.

There was a wide ranging discussion about access to the Burgh Chambers and particularly the suitability of holding CC meetings in the main upstairs space.

Some held the view that the venue was not suitable or welcoming, the layout not good and the chairs uncomfortable. As well as the lack of lift, the outside doors were heavy and hard to open – so a barrier for many people.

But the idea of holding the CC meetings elsewhere was not very popular. It was pointed out that meetings had been held at the Salvation Army (many years ago) and didn’t get more members of the public than now come to the Burgh Chambers. Also it was said some community councils attract no members of the public.

In addition there were fears expressed that not using the Chambers will give Fife Council an excuse to sell off the building.

Several people said that many Burntisland residents want to see the clock tower returned. It was mentioned that Cllr Backhouse (no Fife Councillors were in attendance last night) had told a previous CC meeting that ‘it just needs the Community Council to ask Fife Council’.

It seems the CC is not willing to do this as it would mean giving up Common Good capital assets (and therefore future revenue). After Fife Council appropriated £100,000 of Common Good cash for the cable under the Links (an action that has been referred to the Ombudsman – no decision due until next year) issues around Fife Council’s responsibilities for Common Good buildings and other assets ought to be looked at more urgently.

Access to old buildings like the Burgh Chambers is problematic There are plans to add a lift as part of major refurbishment promoted by the Community Council (currently on hold). There is no absolute right to access, but questions have been raised with Fife Council about whether Community Councils are allowed to hold meetings in buildings with poor accessibility. An answer is expected shortly.

Ian Archibald of the Heritage Centre (housed beneath the Council Chamber) was at the meeting to report on the progress of the restoration of three paintings on display in the Burgh Chambers. (Being taken to the conservers soon.) He pointed out the importance of the building. “I’ve taken people around for 26 years, and they are impressed. It’s a quite unique Burgh Chambers with adjoining courtroom.”

In terms of simple improvements he said it was “easy to replace chairs”. He also outlined another idea for improving access with a lift that could also be used to make the upstairs of the adjacent Carnegie Library accessible and join the two buildings together with a new walkway. They already share a heating system and could become a combined multi-purpose asset.

This would be part of a wider development that could see the 1883 model railway layout move into the space, currently occupied by the neglected museum, when it retires from touring exhibitions in a few years time.

Eventually a consensus was reached around the idea that ‘if we wait until we can get everything, it won’t happen’.

The Community Council has set up a small working group to look at short term possibilities such as a stairlift, new chairs and different layouts for meetings.

Some of the other issues discussed

Playparks – discussion about Fife Council’s strategy (no longer to maintain a lot of parks with equipment). ‘Local’ consultation meeting 2nd October Templehall and online. There will also be local consultations organised by CC. Possibility of a petition discussed.

Plan to improve CC notice board on High Street.

Lammerlaws: extract from report “We are now considering just to concentrate improving the main entrance pathway to make it more accessible for wheelchairs taking it a short distance in to allow anyone to be able to look at the view over the Forth, also a possibility in placing a bench in this area with an interpretation board explaining the history of this area especially the old lime kiln and vitriol works which dates back to the 1700s”

Request for barrier at bottom of Palais Steps to stop children running into road on way to Music Hall. (There used to be one.)

Community Action Plan: only one meeting since January another ‘soon’. Also consultation at Solid Rock and Toll Centre in October.

Paths Group: Updates on Gale Slap route and obstruction on informal path though Docks (by a concrete block), but little progress to report.

Planning Applications: ‘Nothing of interest to CC’.

Subsequent discussion about Shows. Comments from public benches about numbers of vehicles and movements this year. Also about difficulty of identifying people responsible for ‘health and safety’.

CC to hold another private meeting on Friday 27th to discuss priorities and who will take responsibility for them.

Access to the Burgh Chambers for CC meetings was discussed. My own view is – public meetings must be held in places where there is full accessibility. #accessforall it’s ironic to talk about railway station access in a building where those affected cannot attend. https://t.co/SH8qvlaSbk

Whilst I agree with your general point – had you been in attendance you would have perhaps had a slightly more conciliatory tone to your tweet taking cognisance of the general public's deeply held feelings for the history & tradition held within the building. #irony!