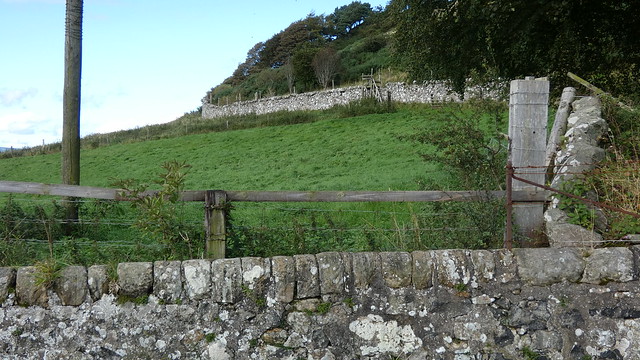 This is where the entrance to a new section of Core Path 568 was due to be created by the end of this year.

Unfortunately it still remains as “Path not yet developed. Use A909 with extreme caution.” Many walkers and cyclists will have tried to find this path as it is on some maps without the “not yet developed” warning. 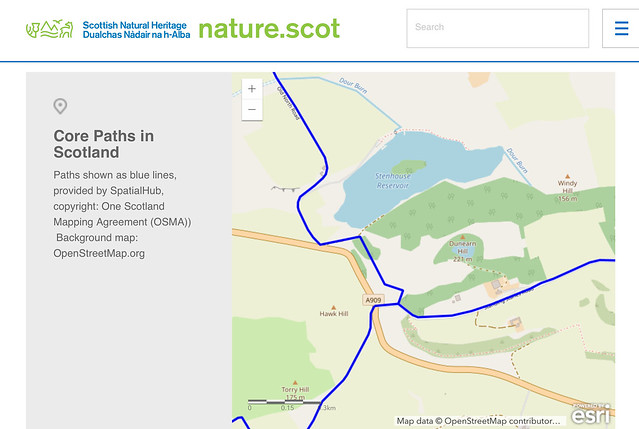 A recent application for planning permission has been marked as “withdrawn” (by Fife Council) on the Planning Portal, due to issues around “Permitted Development”. This could lead to the loss of an approved grant for the work.

Landowners John Low and his son Roddy have been trying to create this path (and improve the path around nearby Stenhouse Reservoir) for some time. They have successfully applied to the Improving Public Access fund (IPA) which “will not be reopening for new applications following a record number of high quality applications in 2018”.

The application was submitted after detailed discussions with SNH which also wants to see this path created. “Together, path users contribute more than £110 million annually to our rural economy.“ (From SNH website.)

Last year one section of Fife Council implied it would be a case of getting a Certificate of Lawfulness and going through the prior notification process. Now The Lows have been told that what is planned requires a full planning application. Their frustration is compounded by being told that if the planned path wasn’t intended for the public a planning application wouldn’t have been required.

Already delays and complications mean that the farmers have decided against proceeding with the path and wetland boardwalk by the reservoir. They have had indications that the grant offer may be extended, but this is not certain.

The bulk of the path is on a steeply sloping hillside and it’s considered unsafe to carry out this work in winter months, so it looks like another year without an eagerly anticipated Core Path route avoiding a busy main road.

John has been involved in other projects to encourage public access to his land. As long ago as 1993 There was an accessibility and community woodland project on his 120 acre farm. This included planting some “highly scented trees” to be appreciated by people with visual impairments – at a time when “accessible” was barely considered.

Scotland’s Core Path Network is a direct result of Land Reform (Scotland) Act 2003. This made all local authorities responsible for leading a wide ranging consultation process.

This brought together people and organisations keen to improve path networks (and some unsettled by the new legislation). Many meetings were held all across Scotland, with tables and walls covered by maps, marker pens and post-it notes.

A lot of voluntary effort was invested in rural and urban areas identifying important existing routes and planning potential new ones. Some proposals were challenged – some were accepted as Core Paths, others were refused – often due to privacy concerns.

“Ramblers Scotland is calling for an increase in government investment in paths to extend the network, encourage more use of paths and help to make the countryside more accessible and welcoming for all. We would also like to see the Scottish Government provide strategic direction to local authorities and national parks to help establish priorities and expectations for the core path network.” 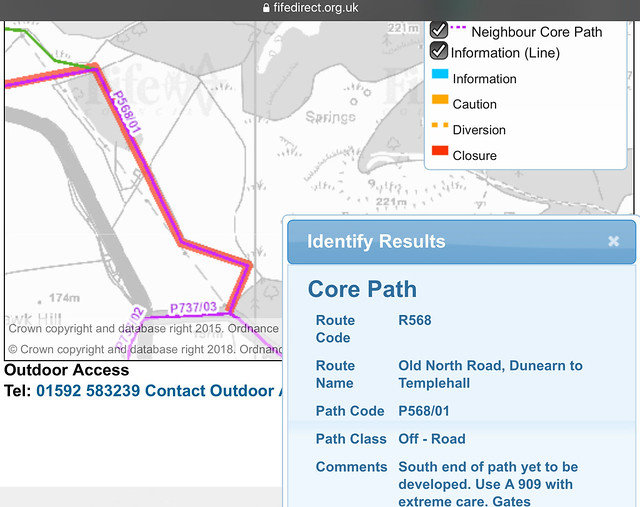 Story about nearby path –