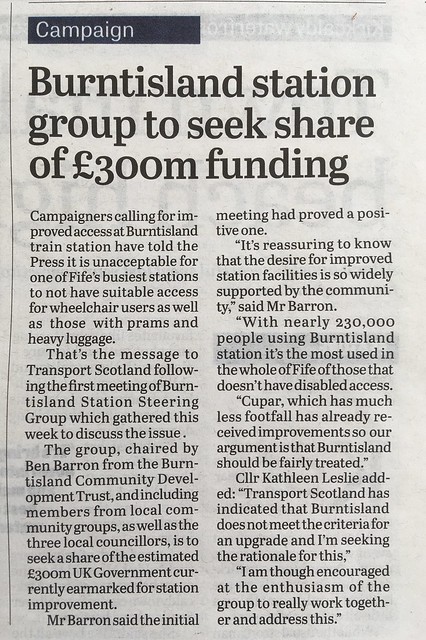 As previously reported, the desire for proper access to/from Platform 2 is decades old.

There have been other campaigns and calls from a succession of politicians for ‘something to be done’. In the past the response from the rail industry has generally been unhelpful and variations on ‘expensive’, ‘not enough footfall (passengers)’ and ‘there will be the chance for a major upgrade when the line is electrified’.

It used to be that electrification of the Fife Circle and/or the main line to Aberdeen seemed to be only ‘a couple of years’ away. It’s now clear that electrification is decades away. Some people believe it will be impossible to add overhead cables to the Forth Bridge, making any future project even more difficult.

Some local people are sceptical about the official footfall figures, thinking that surveys are taken at quieter times of day or parts of the year. “Annual estimated passenger usage based on sales of tickets in stated financial year(s) which end or originate at Burntisland from Office of Rail and Road statistics. Methodology may vary year on year.”

Unlike many stations, Burntisland’s is not just for commuters. Large numbers of people (including many under 5s, who presumably aren’t counted) come for the award winning Beach and Shows that are on the Links for nearly three months.

In addition there is great potential for encouraging more people to come to the town by train – particularly on sunny summer days and the Fireworks & Bonfire Night.

There have been attempts to increase the amount of carparking in Burntisland but it may not be particularly cost effective or the best plan at a time when there are also attempts to encourage Active and Sustainable travel. A well marketed, fully accessible station (perhaps with hire bikes available from a new sustainable travel hub as proposed in the Burntisland energy masterplan) might be better value.

There was agreeement that Burntisland Station should be easily accessed by anyone, and it’s not just about ‘disabled access’.

It was felt that it would be ideal if the work was completed in 2020 when trains have to comply with new accessibility rules.

(Access for All: funding to improve accessibility at rail stations)

The campaign will continue until it is successful.