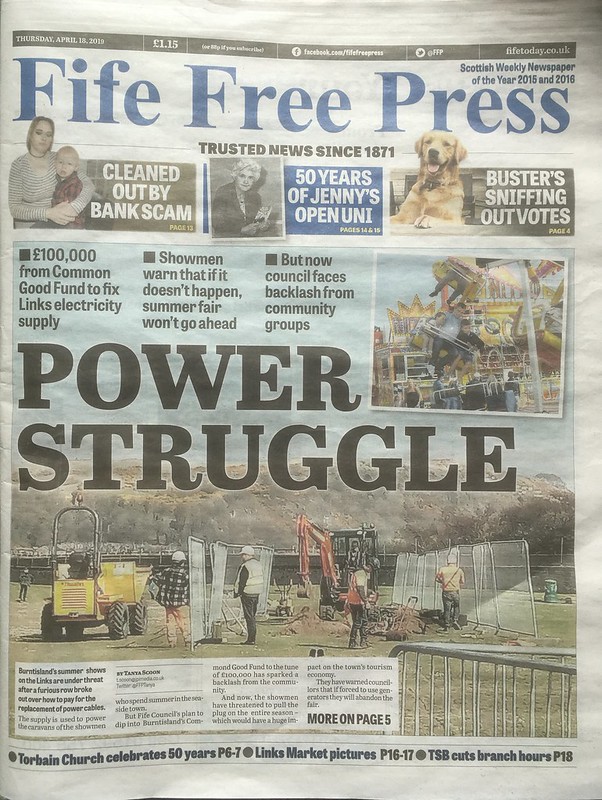 A few questions were asked at today’s Kirkcaldy Area Committee about ‘how we got here’, but the report (P 59-60) recommending “that the Committee agree to the allocation of £100,000 towards the cost of these works from Burntisland Common Good including the use of revenue balances” was approved.

The report stated that “Burntisland Links is common good land. In its Review of Common Good Arrangements (Executive Committee 23rd March 2014), the Council established that the common good funds should, in the first instance, be used as far as possible to maintain and repair common good assets.”

Also – “Target completion date for the work is 25th May 2019, in time for the arrival of the Showmen.”

The Community Council sent a detailed email to Michael Enston, Executive Director Communities, objecting to the funding proposal and questioning its legality.

Extract – “The view of the Community Council, for the reasons given below, is that in terms of the management of Common Good Funds the proposal has no merit and should not proceed.

“An essential requirement of the relevant legislation is that the local authority must have regard to the interests of the local community when administering Common Good Funds.”

Committee Chair Neil Crooks said that the issue of replacing the cable had been around for 3 years but that he had been “advised recently” that no cable renewal would mean no shows this year and so there was “not enough time to allow consultation”.

No-one mentioned that the current works were put out to tender nearly a year ago.

Alan Paterson, Service Manager, Property Services said it was expected that the new cable would last for 25 years. He also indicated that one reason that the existing wiring only worked for about 15 years before it needed to be patched up is because the type of cable was designed for continuous use which allowed it to heat up slightly. The cable is only in use twelve weeks per year.

Today’s meeting also heard that the Showmen have a separate cable system for powering the rides. It was not explained why they own this one but not the one used for their caravans.

The Showmen pay rent for the shows and caravans to Fife Council. It seems that FC only pays £500 to the Burntisland Common Good Fund. This is the same as for “Sub-Station Site The Links”.

Neil Crooks said there were “a lot of questions” and there is a “need to shine a light on” Common Good issues generally. He also said that he wasn’t sure that the things in the CC’s email were “all accurate” but that it “raises valid points”.

Kirkcaldy Area councillors will discuss Common Good when they meet in May. 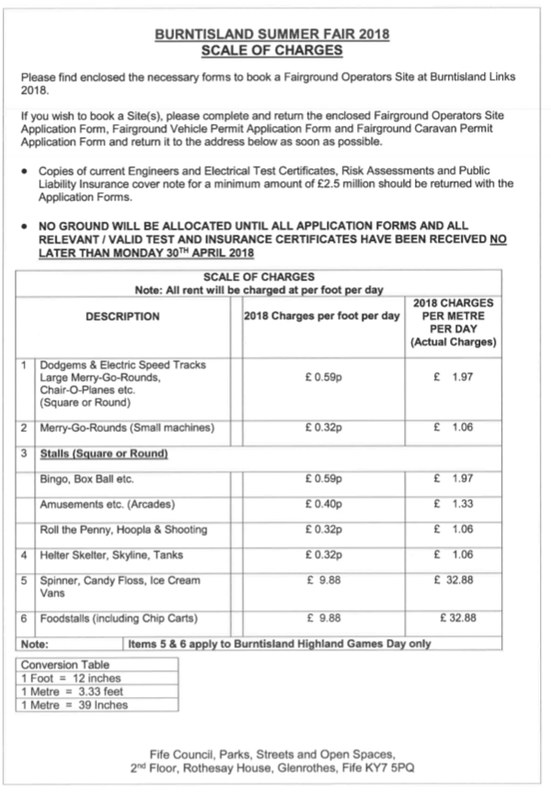 Previous B.B story about this

Burntisland Links: Work has started – the row has just begun

If councillors and officers decide to dip into the Common Good Fund, they can reasonably expect to be questioned and challenged.

If they do it in a town like Burntisland, where there is a strong sense of civic pride and a very active, well organised community council, they will immediately come under forensic examination.

The issue of who should pay for power upgrades to the Links is clearly contentious.

Burntisland Community Council’s stance is clear. It should have been consulted on any use of the Common Good Fund. It says it was not.

If so, the council must explain why.

It also wants to know why the income generated locally via the annual shows is distributed Fife-wide rather than going back into the ultra local fund.

Tuesdays area committee ought to have been able to answer that with clarity.

Instead, it took the ‘confusion’ in-house for a members’ meeting.

If councillors want more guidance it is entirely appropriate for them to seek it in-house, but that should not be at the expense of public debate and examination on an issue of huge interest and importance.

What was wrong with the committee discussing this in full, in open, and in depth?

It does feel as though the committee is perhaps on the back foot after the showmen’s threat to abandon – their word – the shows if the electricity supply wasn’t sorted.

Idle threat or not, that defiant stance didn’t help matters.

They too ought to have sat down and been part of any discussion.

And the issue of funding the repairs, ‘who authorised the work, who was consulted, and what alternatives were explored it – key questions the community council is right to raise – should have been resolved much earlier, and not a few weeks before the summer season begins.

The work has started. The row has just begun.