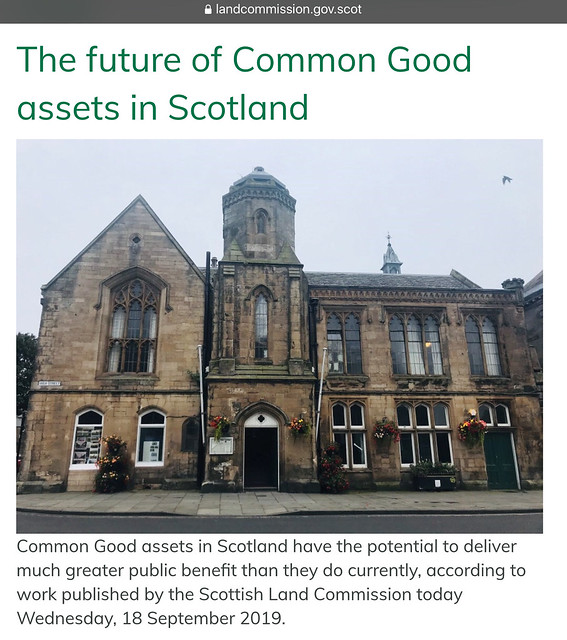 Scotland’s Common Good Funds are worth hundreds of millions of pounds – the vast majority of which is accounted for by land and buildings. Many of these assets are of significant local importance and heritage, and valued by residents – buildings like town halls, tolbooths, and former burgh chambers, as well as parks, gardens, links, and woodland – and the annual income generated by these funds is often distributed to local causes.

Building on an investigation into Common Good assets completed by researchers at the Centre for Local Economic Strategies (CLES), the Commission believes that with the right governance and legal framework, modernising Common Good assets could be a game changer for urban land reform and community ownership in Scotland’s towns and cities.

Common Good assets are held for the benefit of local residents of former Burghs, they can be found in cities, towns and villages across the country, and often include some of the most locally cherished land and buildings such as town halls and parks.

Local Authorities are currently responsible for the management of the Common Good assets in their area, and the research published today shows that management approaches, and community engagement in decisions relating to those assets, can vary significantly across the country.

There are many buildings throughout Scotland that could have been used as an example. Perhaps the use of this well known local landmark will make more people realise how important it is to the past, present and future of the Town.

Perhaps it’s refurbishment and reinvention can become a higher priority and a new group formed to make it happen.

Land reform is a key policy priority for the Scottish Government, and one that it views as integral to regeneration and sustainable development in rural and urban Scotland. Its previous target of moving one million acres of land into community ownership has been superseded with the more general objective of “normalising” the acquisition of land and buildings by community groups.

(From information about Land and Local Government: A SURF People and Sector Connector Gathering – 25th Sept.)

Very welcome report from Scottish Land Commission. Many of us been calling for modernisation of common good law since 1999 but we are still working with a law of 1491! https://t.co/5buv5VLumz