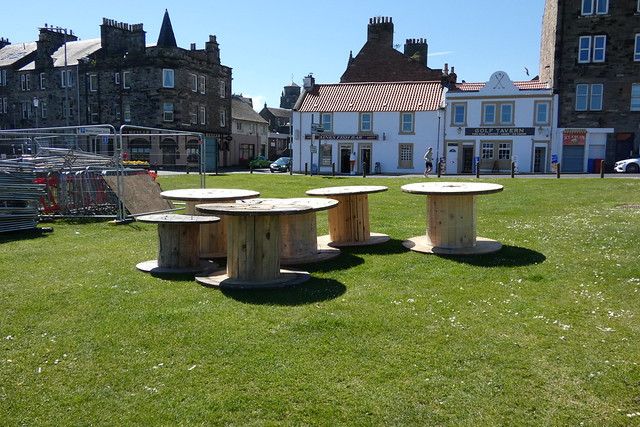 On Friday night CC Chair Alex MacDonald asked for a show of hands to confirm that the decision, to refer the matter of who should pay for the cable renewal on The Links, was unanimous.

The CC had heard about a recent Freedom of Information request which revealed that the cable now being replaced was commissioned in 2002 by Fife Council but it no longer has any record of how it was funded. It was expected to last 25 years but documents show it was failing in 2013 and even after remedial work, ‘it shouldn’t have been used after 2016’.

The response to the FoI request, showed that there had been no plan to pay for replacing the cable, or even a maintenance regime that might have prevented it failing early.

Last year it was decided that the cable shouldn’t be used, but this decision was reversed and FC was supposed to find the money in time for the cable to be replaced for this year’s Shows. It was unable to find all the money in any of FC’s own budgets.

The Showman told FC that they were not prepared to use generators this summer and said that without a mains supply they wouldn’t come to The Links.

FC officials decided that this should be avoided and that the only source for the bulk of the cost (£100k for a £170k bill) was Burntisland’s Common Good Fund.

One of Fife Council’s three representatives for Burntisland, Cllr Gordon Langlands, told the CC meeting that the revenue fund only contained about £53k so money would also be taken from future years, meaning further reductions in money available for spending on projects in Burntisland.

This money grab is being claimed as legitimate by FC because it’s “exceptional work” and this, apparently, is allowed – without consulting the CC – because of a rule change three years ago.

In addition, the fact that the Shows pay FC about £100k per year and only FIVE HUNDRED POUNDS is added to the Common Good Fund, needs some urgent reviewing.

It is not clear where the rest of the money actually goes. Cllr Langlands said some of the figures for “overheads” seemed to be a “bit dubious”.

One community councillor wondered if the police should be involved!

Cllr. Langlands said that he would back the referral to the SPSO and hoped that it would also provide clarity for future attempts to use Common Good funds.

Burgh Buzz editor Bill Kirkhope said that he had been critical of Fife Council in the current issue, but after listening to the discussion realised he “should have been more critical”.

“The Scottish Public Services Ombudsman (SPSO) is the final stage for complaints about most public bodies in Scotland.“
https://www.spso.org.uk