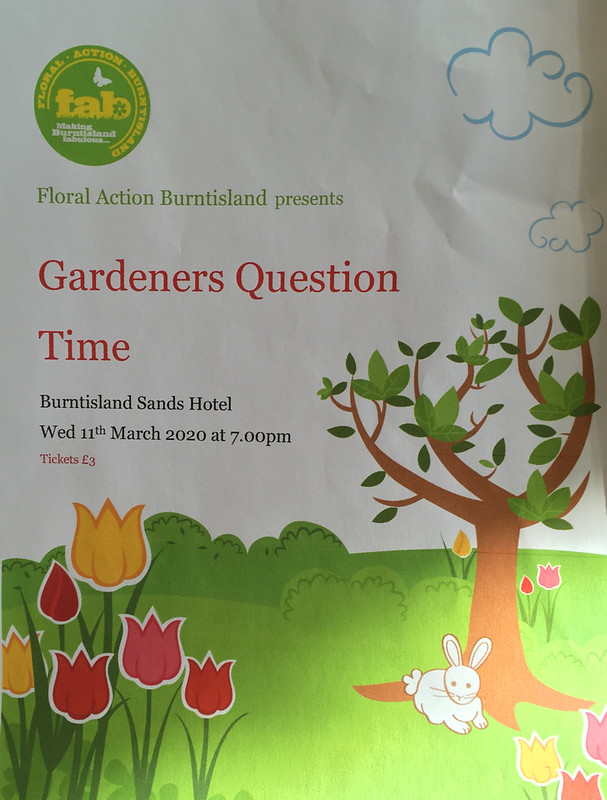 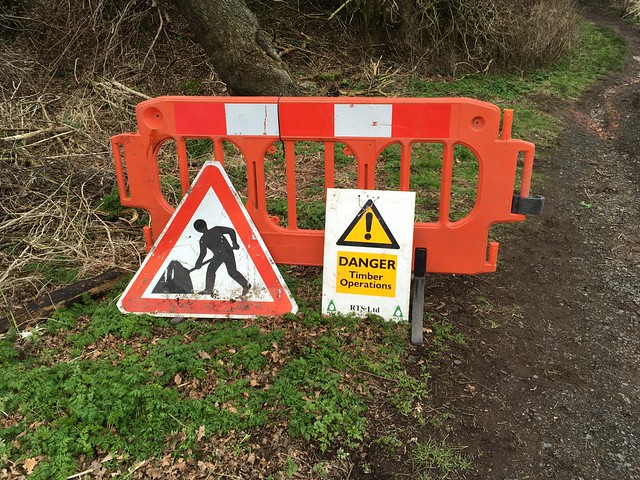 This morning a squad from Fife Coast and Countryside Trust began a small amount of woodland management by the path from Kirkcaldy Road to Kirkbank Road. 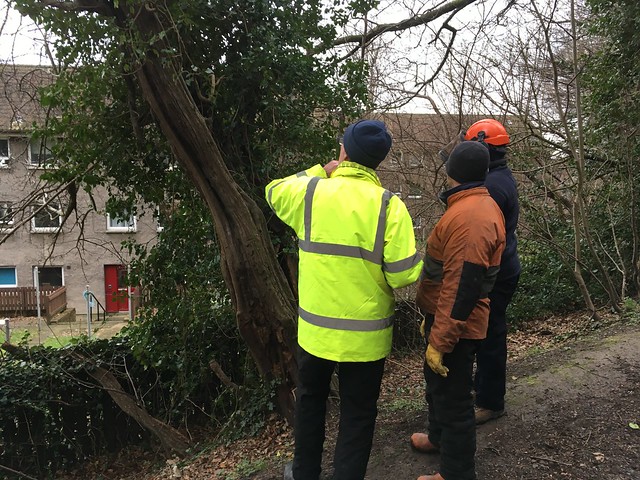 This great bit of woodland is much appreciated by many walkers and frequent visitors from Burntisland’s Primary School and Nursery, Out Of School Service and playgroups.

In summer the path can become almost impassable in places due to the rampant vegetation. After it rains there are quite a few muddy patches. 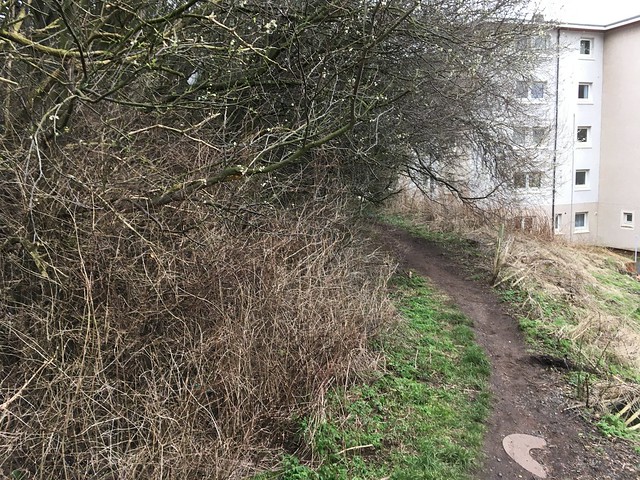 Today FCCT removed a few overhanging branches and a small number of dangerous trees and branches. 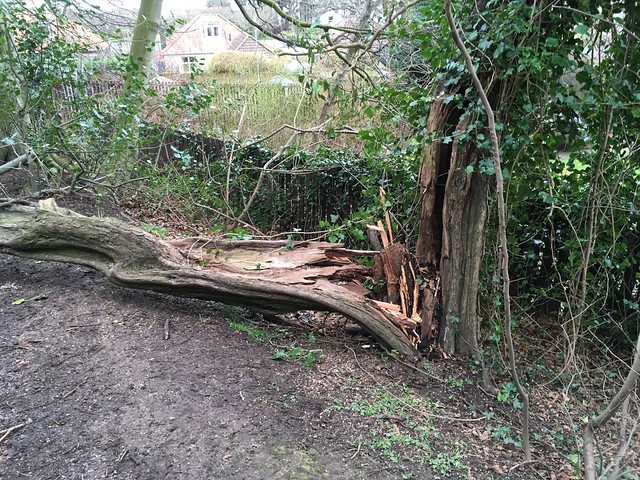 Part of the path and woodland is owned by Burntisland Golf House Club, the rest is managed by Fife Council. 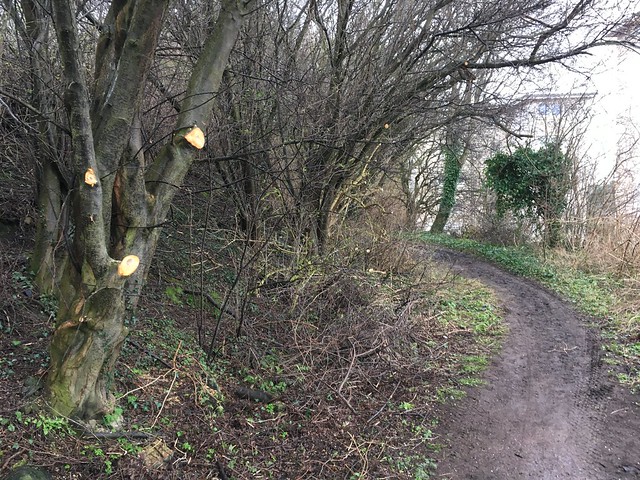 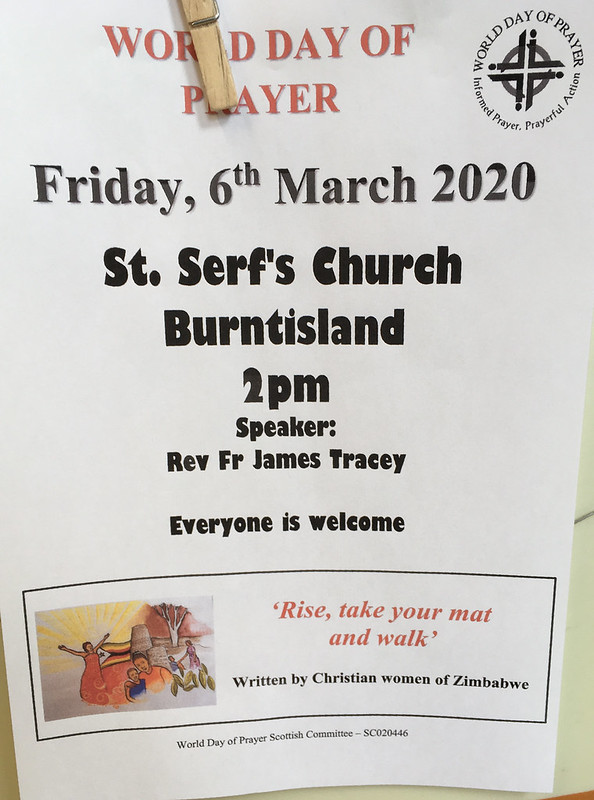 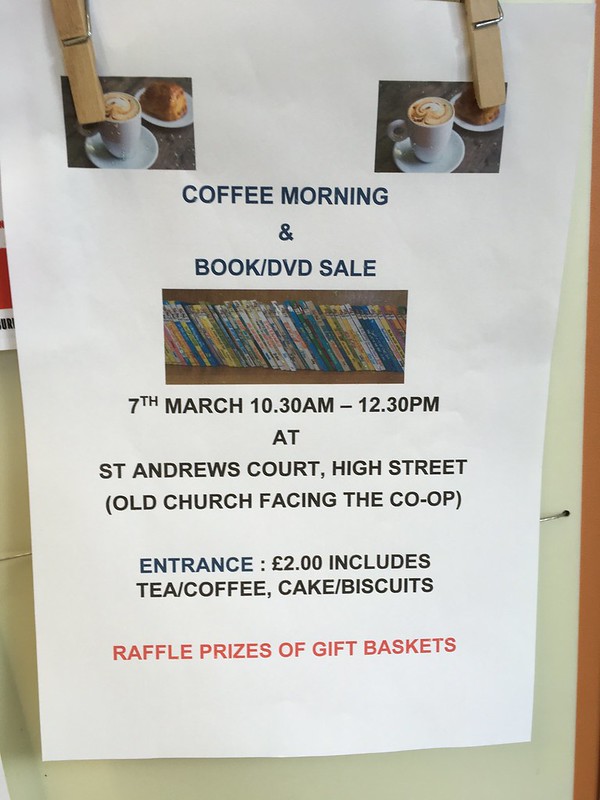 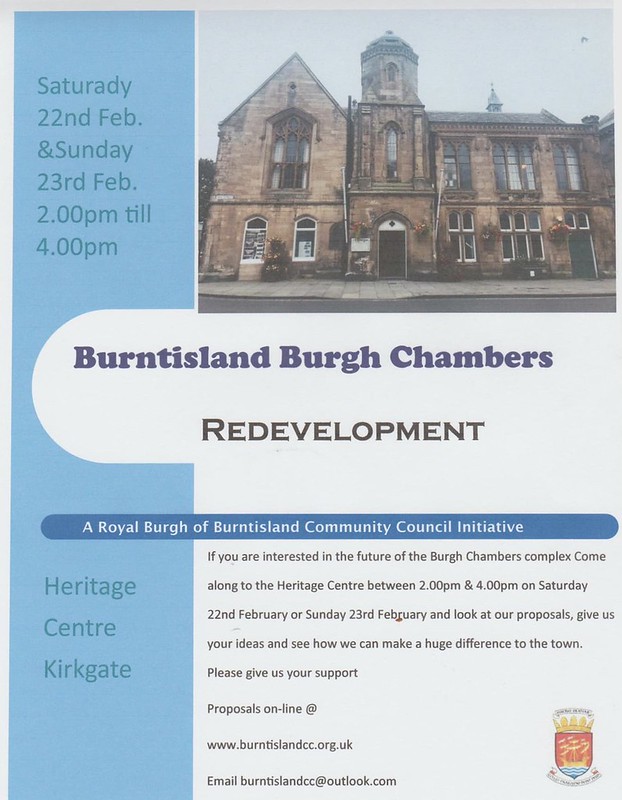 Many people in Burntisland think that the most important thing for the Town is the return of the clock tower.

It seems likely that this can only happen as part of a major overhaul of the whole building.

The Community Council has been looking at the options for some time and various reports have been written.

Tomorrow and Sunday people can see some of the information and talk to key people involved in the project for upgrading and securing a good future for this very important building.

If the building is to become a community asset, a new, independent, trust has to be formed.

The legislation that allows a transfer of this, and similar assets, from Fife Council requires that any trust taking on the responsibility needs twenty trustees. 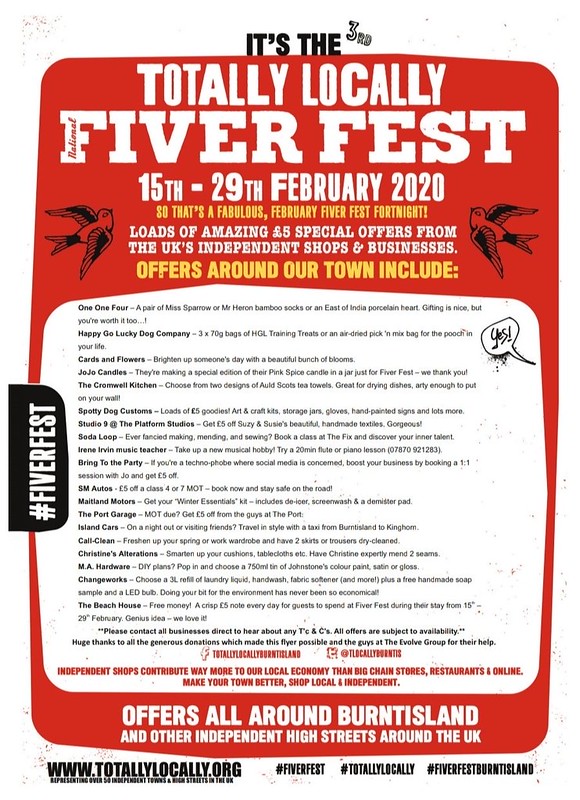 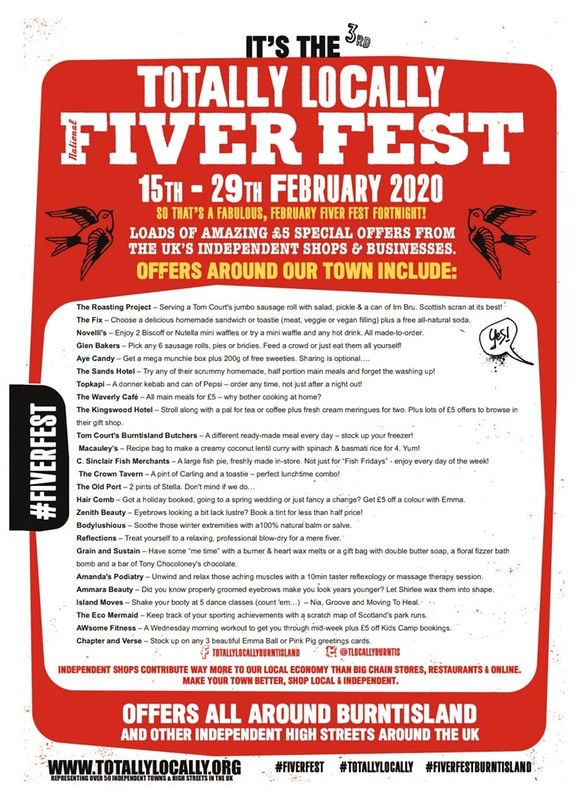 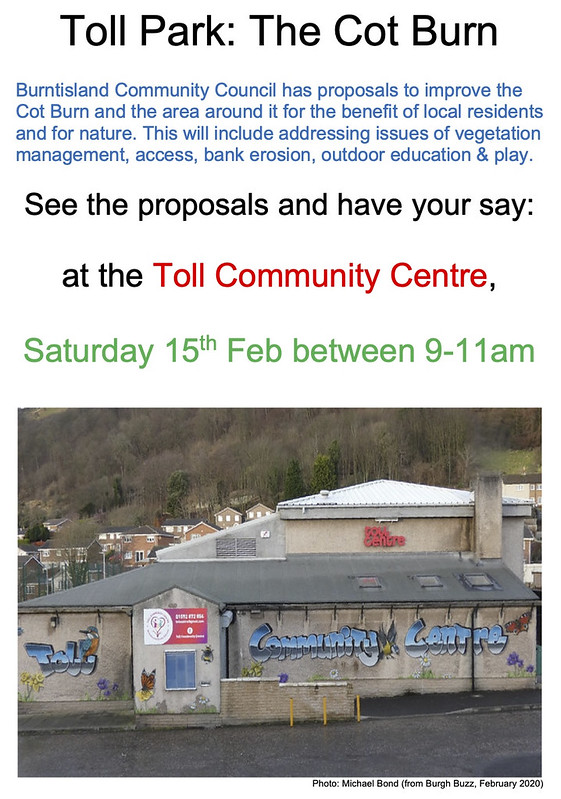 There is also an online survey with 8 questions and room for comments.

‘Doing something’ about the burn near the school has been been a concern for several years. Some people think it’s untidy and the state of the fence makes it dangerous others see an opportunity for making it more attractive to look at, play around and be more desirable for wildlife – with added educational opportunities.

A year ago the Kirkcaldy Area Committee agreed to put £20,000 towards the estimated cost of £35,000 for a new fence and general cleanup.

“The project will consist of the installation of 340 metres of secure fence on the north side of the pedestrian walk way. Service entrances will be installed to help access for future maintenance. In addition to the secure fence, work will also be carried out to clean out the Toll Burn and remove overgrown vegetation in the vicinity of the burn.“ 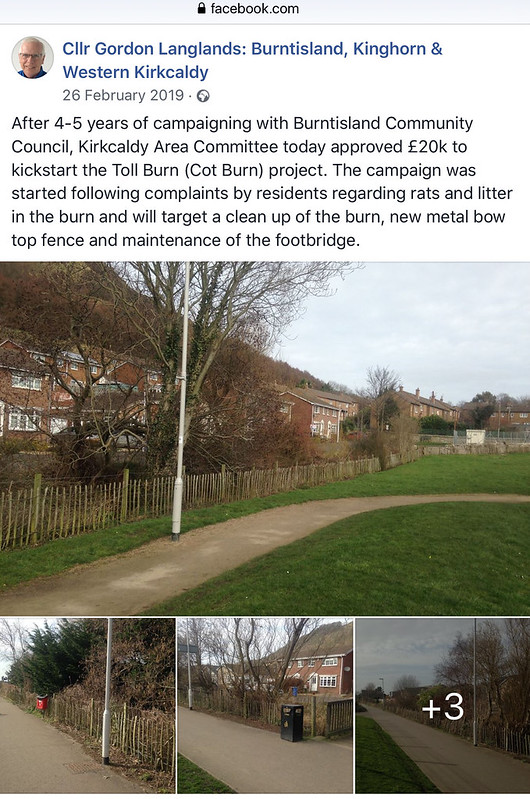 Facebook link (One of the comments – “great news, as a wee lassie I would go catch the wee fish and tadpoles in that burn and take them home in tubs, never would I let a kid near it now 🤢 well needed clear up”

It was never clear how this work would have been done and, especially, how much of the vegetation would be cleared. Bulldozers were mentioned at Community Council meetings and it was thought, by some, that the burn was polluted – probably by effluent from the Alcan site at Whinneyhall. In fact, treated water is in a pipe that follows the burn. (Inspection covers, with yellow numbers painted on, are visible along the pipe’s route to the Forth near Rossend Point.)

Nearly a year ago some local residents cleared many bags of rubbish from the burn over two weekends. Since then the school has changed the way children eat snacks and dispose of wrappers. This has resulted in less rubbish blowing into the burn. 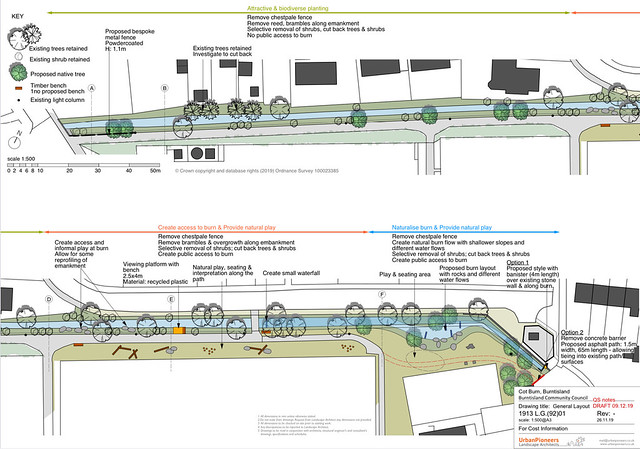 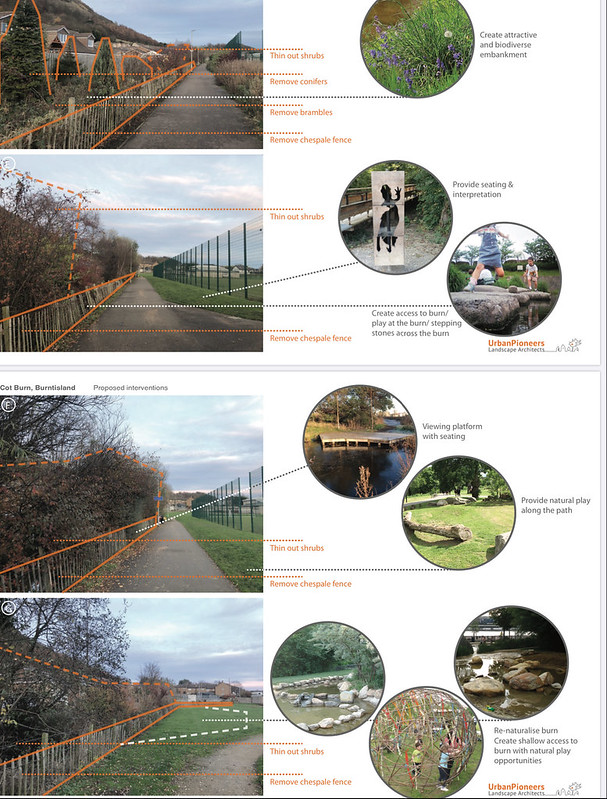 The photo (Google StreetView) below shows the burn and park before the school was built. It’s perhaps unfortunate that the only change has been a new path and nothing was done to make it easier to access the burn by the school. 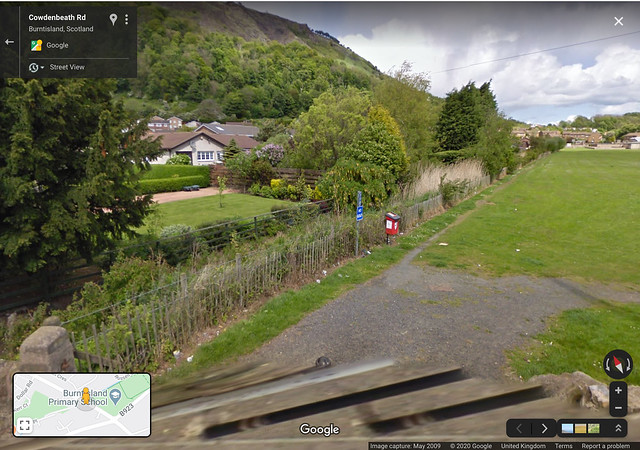 Many people call this stretch of water the Toll Burn, or just the burn but it used to be called the Cot Burn and some people still call it that.

There are surprisingly few references to the Cot Burn. It’s mentioned three times in The Edinburgh Gazette of FRIDAY, NOVEMBER 21, 1851 in an interesting article about Burntisland’s water supply.

Do you think it should still be the Cot Burn or the Toll Burn? 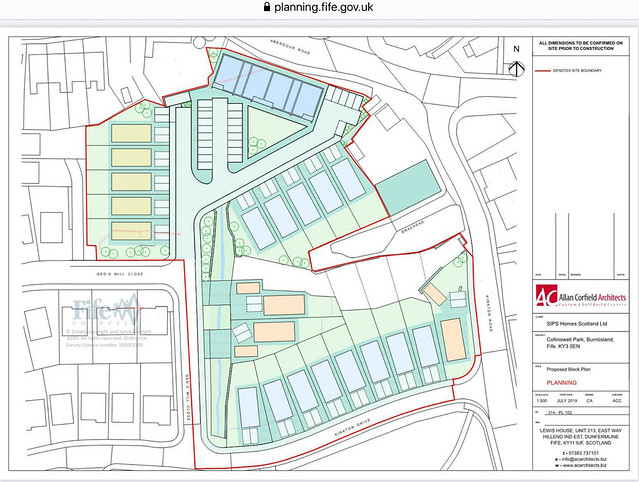 A planning application has been submitted for the “Erection of 21 dwelling houses and 16 flatted dwellings”.

There are currently 25 documents associated with this. The latest is from Scottish Water. This states that there is currently enough water capacity but less clear about sewage capacity for this development.

Scottish Water has no objection to this planning application; however, the applicant should be aware that this does not confirm that the proposed development can currently be serviced and would advise the following:

There is currently sufficient capacity in the GLENDEVON Water Treatment Works. However, please note that further investigations may be required to be carried out once a formal application has been submitted to us.

This proposed development will be serviced by BURNTISLAND Waste Water Treatment Works. Unfortunately, Scottish Water is unable to confirm capacity at this time so to allow us to fully appraise the proposals we suggest that the applicant completes a Pre-Development Enquiry (PDE) Form and submits it directly to Scottish Water. The applicant can download a copy of our PDE Application Form, and other useful guides, from Scottish Water’s website at the following

The applicant should be aware that we are unable to reserve capacity at our water and/or waste water treatment works for their proposed development. Once a formal connection application is submitted to Scottish Water after full planning permission has been granted, we will review the availability of capacity at that time and advise the applicant accordingly.

So this may be refused or extra capacity might need to be installed in Burntisland which should solve the perpetual flooding problems on Haugh Road and the greenspace and playpark at Kirkton Road. 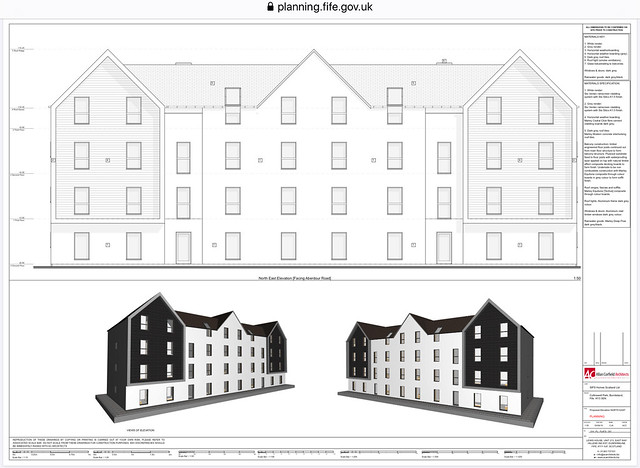 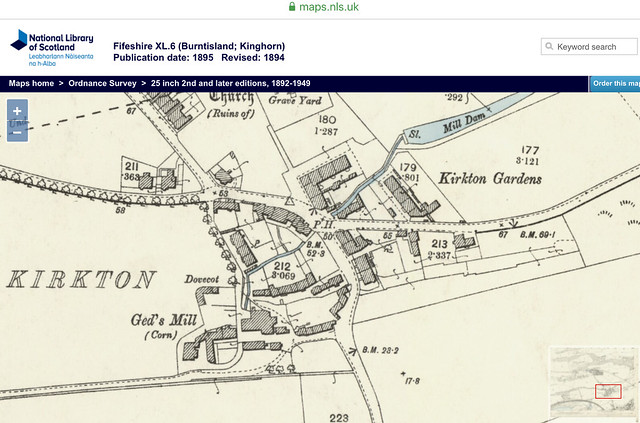 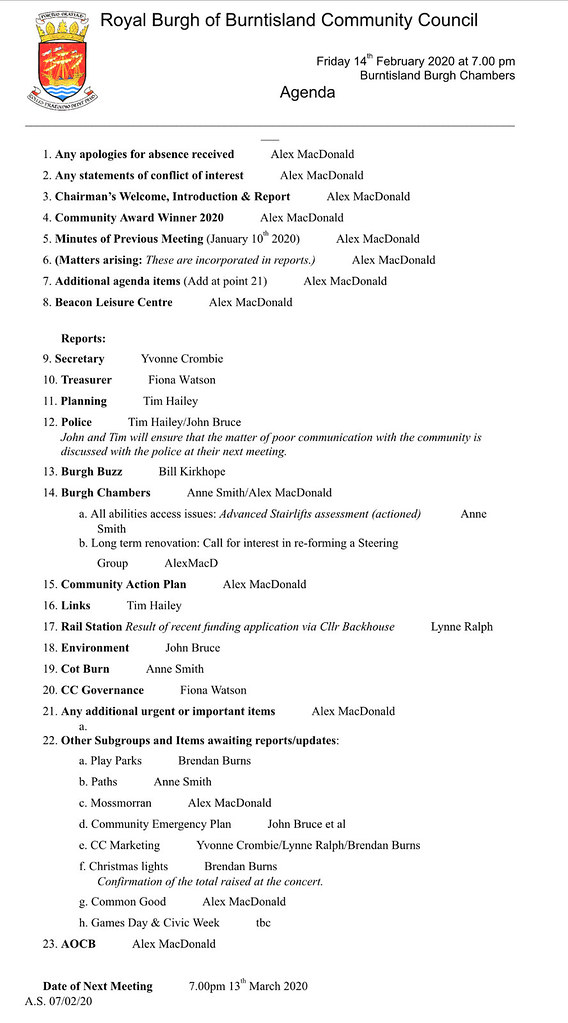 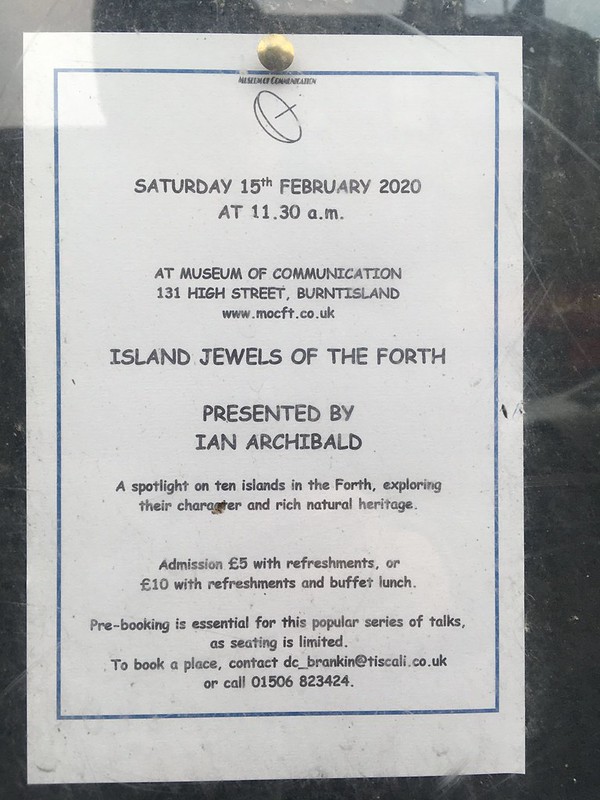 Poster on the Community Council’s noticeboard

Another chance to hear the entertaining and informative talk by Ian Archibald (Burntisland Heritage Trust Convenor).

Ian also created the exhibition of the same name for the Heritage Centre.

Watch for future repeats of this popular illustrated talk.