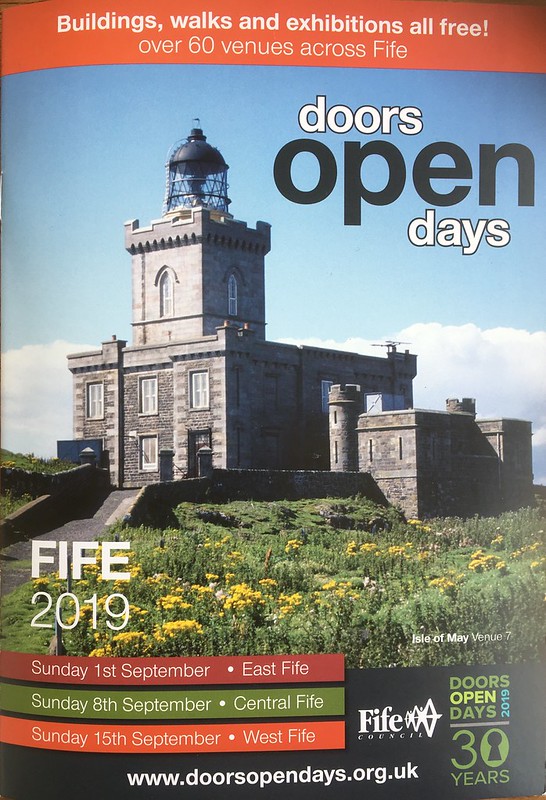 It’s now the 30th year of this great scheme which covers the whole of Scotland.

Only two buildings are listed as open in Burntisland this year (Sunday only) – the Heritage Centre (from here you can also visit the Burgh Chambers) and Parish Church – but plenty more in Central Fife and Kirkcaldy.

In addition on the 8th, and 7th, 6 artists’ studios are open. 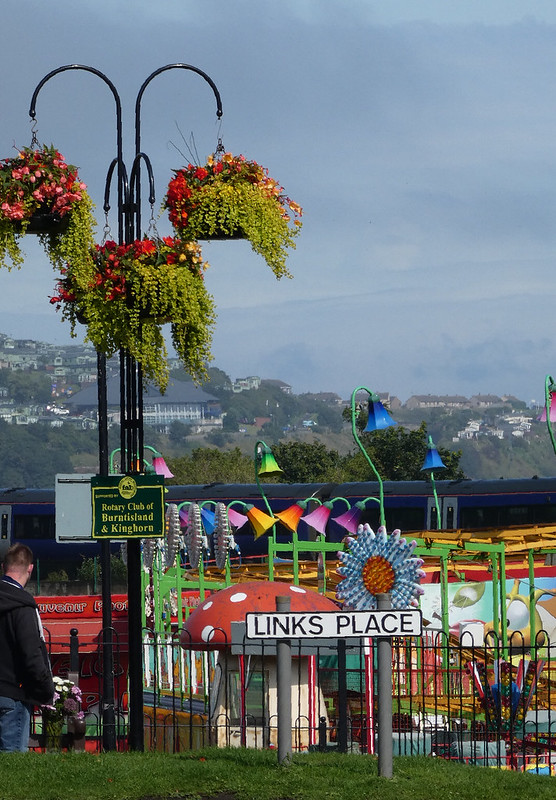 “Burntisland is a small town on the coast of Fife, in between Kinghorn and Aberdour, and it’s a town that’s doing something pretty special.

“​It’s a town which I’ve visited practically every summer for as long as I can remember, mainly for the Fairground that comes for the entire school summer holidays.

“The high street is bustling, the shops are open and there is a lovely, happy vibe. There is an amazing sense of community, the locals are proud of their small independent shops and regularly use them. The shop keepers work together and share ideas. People chat in the street and shop keepers know their customers by name. It seems to be, at least partly, down to an initiative called ‘Totally Locally’.” Family friendly event to raise awareness of mental health, self harm and suicide.

Join us for an afternoon and evening of music and fun for all the family, and a chance to meet different agencies who can support you with your mental health.

Just a taste of the day!! More info to follow .. tickets at the door , under 16s go free… Rude boys a 10 piece SKA band have just confirmed …,something for everyone pic.twitter.com/WzWiUKmjV4 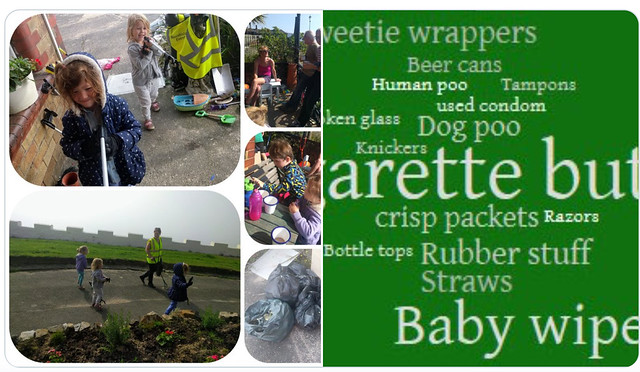 Thanks so much to everyone who came to today's Beach Clean. We got several bags of rubbish once the mist cleared! See you next month 🙂@BurghDot @TLocallyBurntis @EcoKinghorn pic.twitter.com/uO9ytxbVaS

(Next one 29th September) 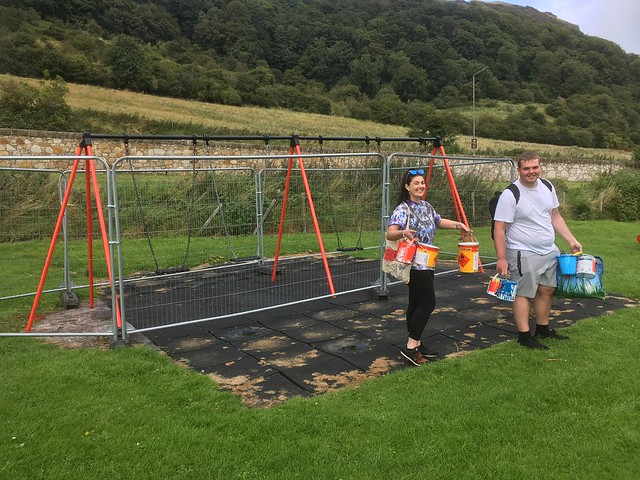 Organised by Brendan from the Community Council with money from its playparks and open spaces budget, the painting got off to a good start on Tuesday, but rain stopped play.

Photos from the day –

On @IntScotGinDay we are delighted to announce our partners for the 1st Burntisland Festival. 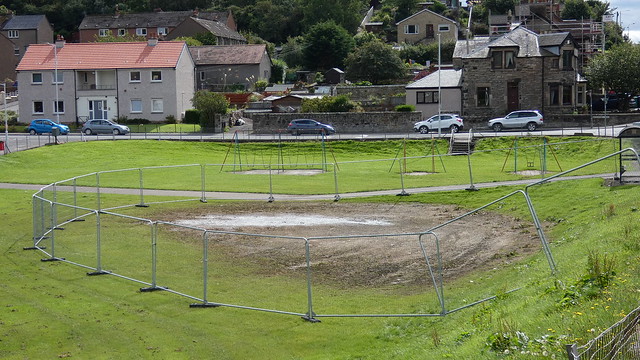 The rainstorm that ended Live on the Links ten days ago once again lifted the sewer cover on Kirkton Road with gallons of water flooding the lowest part of the road and spilling over the grass by the swings.

After a prolonged Twitter exchange, Scottish Water finally fenced off the most polluted area today – and promises “to attend with a jet vactor”.

Is there a plan now?

Looks much the same today – pic.twitter.com/wKXVY9cm8v

Councillors in Burntisland have called on Scottish Water to meet and discuss a plan of action to tackle long-standing flooding issues at a town playpark.

Councillors Gordon Langlands and Kathleen Leslie have been contacted by locals concerned about contaminated sewage water flooding the park, which is bounded by Kirkton Road, Broomhill Avenue and Dick Crescent. 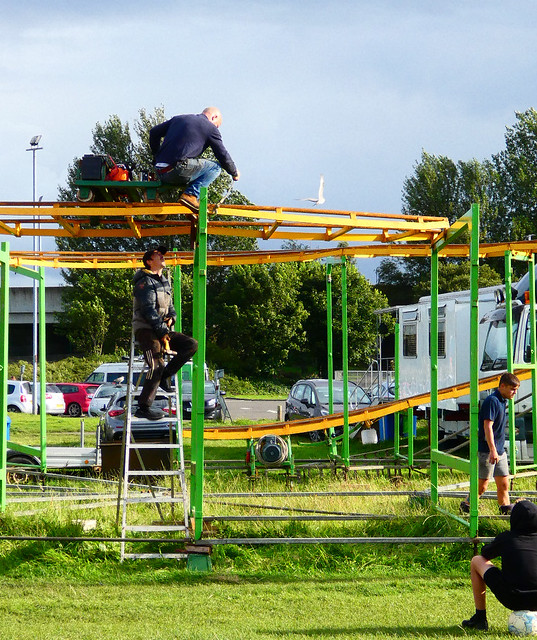 Sunday was the final day – the schools go back this week.

The season got off to a bad start with June being a disappointment for the Showmen. Games Day was busy and one of the few days when car parks were full. 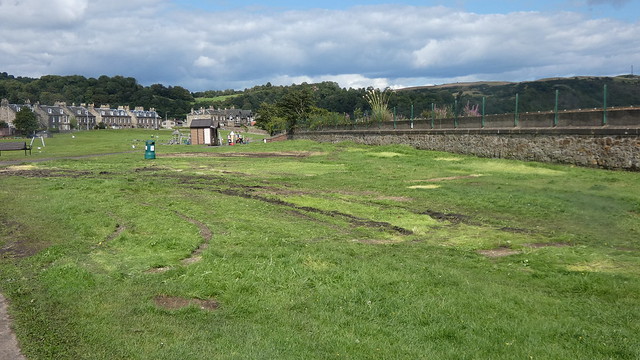 Much more rain this year than last year, so no scorched grass. In contrast the soggy Links has suffered some vehicle track damage – which Fife Council is due to remedy. (The grass has already been cut.) 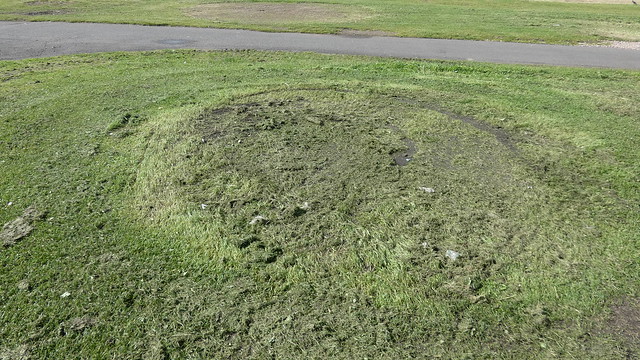 Before the Shows arrived there was the fuss over the new power supply – and how it should be paid for. The standoff between Fife Council and the Community Council continues and may end in court!

There were suggestions in some quarters that without power the Shows wouldn’t show. This may have been fake news.

The Shows have been part of Burntisland for generations, and will be for the foreseeable future. Every year there are murmurs and rumours and various ‘issues’.

Some people in Burntisland wish there were no shows, ever. Some fear that if shows didn’t come ‘the High Street would die’ as summer trade means shops can stay open all year.

Some think the ‘takeover’ of the Links is for too long, also that the way some rides leave early, leaving gaps, is ‘unattractive’. 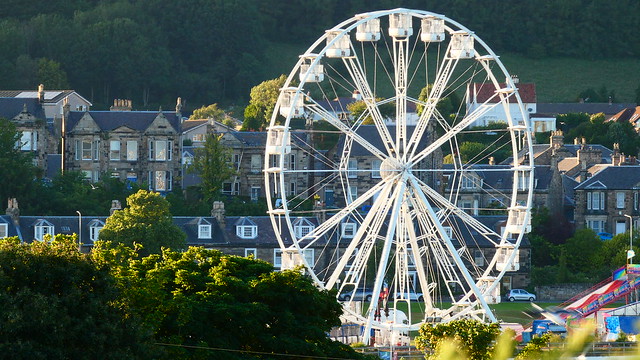 This year the arrival of the Big Wheel was exciting, but it only stayed a couple of weeks – with a lot of rainy days. This was a real attraction for all the family, it is expected to return next year. The relative lack of rides to attract teenagers gets talked about.

Burntisland Links is one of many assets held as Common Good. These are administered by Fife Council with some input from the Community Council. The Community Development Trust has recently set up a subgroup to look at some ways of improving the Links and beach area.

Last year a meeting was called by the Community Council after Fife Council made arrangements for parking on the Links in the area used by the Highland Games. “Those present almost unanimously wanted no parking on The Links at any time.“

This year there has been very little unauthorised parking on the Links, partly because of the large bund (the mound made from the sand dug up when the new cabling was laid). A gate was also installed, the second one has still not arrived. 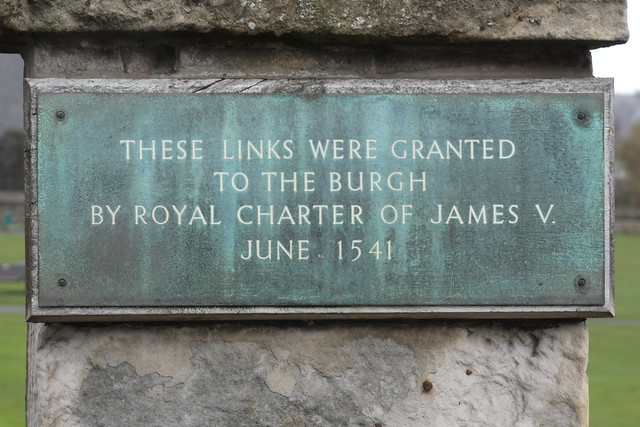 Every year there are meetings between representatives of the show owners and Fife Council (officials and councillors). Perhaps there should be a meeting (at least once a year) which would also include representatives from other groups, for instance –

Community Council: longstanding interest in the Links generally, but particularly parking, ‘seagull proof’ bins and the state of the toilets and the water playpark.

Burntisland Community Development Trust: this is looking at a wide range of ways of making the Links more attractive (some overlapping with the CC) including plans for the toilet block, shelters, drinking and feet washing water (there is piped water in several places on the Links), more shelter, more sensitive grass cutting regimes and opportunities for planting.

Highland Games: concerns about making sure the Games area is always in good condition.

Live on the Links: aspiration for a covered bandstand and the possibility of more events.

Events Group: currently only organises the bonfire and fireworks – this attracts thousands, in the dark so paths, lighting and hidden holes are some of the concerns.

FAB (Floral Action Burntisland): the group supplies hanging basking at the west end, and has plans to revitalise the rose garden at the east. 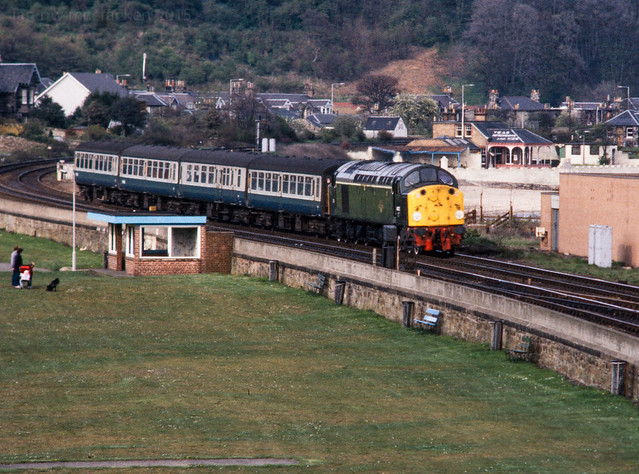 There was at least one other shelter on the Links. Removed when/why? Note also benches and bins. 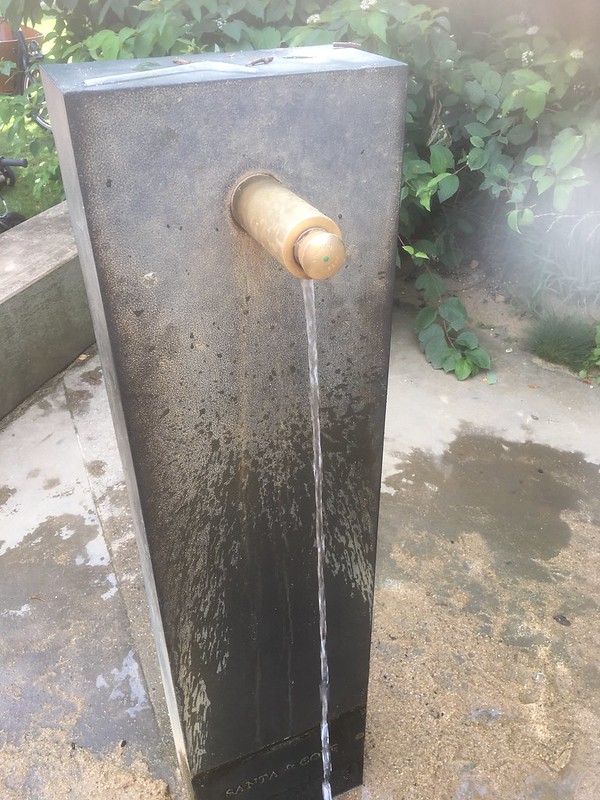 An example of a modern drinking bottle refiller and feet cleaning fountain.

A councillor, community councillor and several local people sanded the metal frames and will paint them during the day.